The Lol Goodman Band
with:

The Lol Goodman Band are excited about bringing their brand of original blues/rock inspired material to Worcestershire’s Premier Music Venue, The Marrs Bar on Saturday 13th February 2016. They will be playing tracks from their two critically acclaimed albums “Old Dogs ‘n’ Licks” and “Tautology” along with some new material and a few classic covers done the LGB way. So, if you like your blues with a rocky edge get down to the Marrs Bar.
www.lolgoodmanband.com 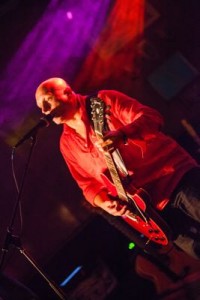 The Lol Goodman Band have, since their formation almost four years ago, carved out a niche as one of the North of England’s best live bands. Based in North Manchester and playing mainly blues/rock inspired original music, the band are out to prove that the blues genre is not only alive and well but evolving with some fine, well crafted material from Lol Goodman.
Their first gigging experiences as a 3 piece was the North of England pub circuit, not ideal for a band featuring mainly original material, but they persevered and gradually built up a following and a core of pub venues where the audience appreciated their material.
Early in 2013, 12 original tracks were committed to disc and the result was 12 track CD “Old Dog ‘n’ Licks” which, for a first foray into the studio, got great reviews in national & international blues magazines etc. It also introduced the band to the listening public via local and web based blues radio shows and a live studio session at Trent Sound Radio.
Almost a year later, with 12 new songs added to their live set, a second album was needed, so back to the studio where, with the help of old friends Rod Mayall (John Mayall’s younger brother) on keyboards, David Turnbull, tenor sax and local session musician Phil Barrett, keyboards, another CD was produced and a name chosen – “TAUTOLOGY” and Paul Stiles, editor of Blues in Britain, published an article & review in the April issue to coincide with release of the album.
On Sunday 8th June 2014 the band were interviewed by Nick Dow for his long running blues show on BBC Radio Lancashire. In the lead up to the Stafford Blues Festival, Den Siegertsz invited the guys down for in interview & play two acoustic songs on Saturday 29th August 2015.
2015 is set to continue in the same vein with dates booked at and appearances at as well as gigs at major blues venues further afield