Originally formed by Robert Calvert and Dave Brock (of Hawkwind) from the ashes of The Sonic Assassins in 1978.
The Hawklords re-emerged in 2009 with a memorial concert for legendary British artist, the late Barney Bubbles, graphic designer for many of Hawkwind’s early 1970s albums.
The band return to the UK tour circuit with THE R:EVOLUTION TOUR in 2015. 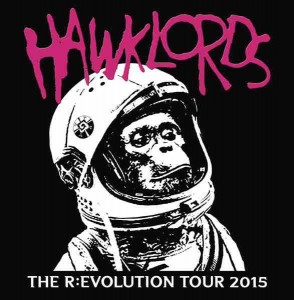 Black Light Secret are one of the coolest psychedelic rock bands to come out of the Midlands in recent years. It’s difficult to put them in a category, but their music ranges from psychedelic space rock, to Dub infusions. Step in to another dimension with these masked marauders of the void. Let their musical fronds of form and harmony, take you on a pleasant journey. No middle 8’s – No choruses – just natural & organic at its finest.