A Rogues Acoustic Lunch
with: The Grimaldi band, The Players + Stompin' On Spiders

A swing back to the 1970’s is being put into practice by three Worcestershere based bands, who would like to broaden their appeal to people who appreciate original / self-penned contemporary live music. 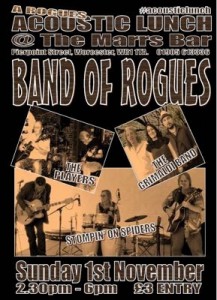 The Grimaldi Band, The Players and Stompin’ on Spiders have combined their resources into a music collective called “The Band of Rogues”. The members of the three bands have a great deal in common in terms of professional and musical commonality, joint creativity and mutual respect and friendship that will be channelled into live performances around the region in the coming months.
The concept behind performers and bands working as collectives is far from new. In the mid-1970’s when mobile discos and the economic down-turn began to oust live music from pubs and clubs, local working musicians formed “co-operatives” to aid their quest for gigs. During those turbulent years, if a band or musician wanted to be seen at a live music venue, being part of a “co-operative” was often the only way to get booked. Whether you were Elvis Costello, Nick Lowe, Dave Edmunds or Madness on the national scene or the likes of The Stiffs, The Strumpets, The Aviators or Old School Sky working local pubs, operating as a collective was the best vehicle to get exposure to the music loving public.
Today, there is more live music in being performed in pubs than ever before across the county, so to stand-out from the crowd and achieve greater exposure of their original music, pooling their experience, resources and love of live music together, is seen as a positive move by The Band of Rogues collective.
The three bands have a large canon of recorded material currently available in CD, USB and download formats and their live performance on stages and festivals around the region during 2015 have been admired and enjoyed by many.
On Sunday 1st November 2015, the first of many Band of Rogue concert gigs takes place at The Marrs Bar in Pierpoint Street, Worcester. The Grimaldi Band, The Players and Stompin’ on Spiders will be performing their original material and a full range of merchandise and albums available throughout the afternoon into the early evening. Doors open at 2:30pm with the first band on stage by 3:00pm